Who knew that cows could be so curious? Who knew that wine country also happens to be perfect cattle country? We are in Penngrove, California visiting Peyton Ann and Seth and their daughter, Lacey. The first morning there we have the opportunity to wake up, throw the heavy curtains back in the guest room and see four acres of pinot noir grapevines just beginning to bud . The just rising sun hovers over The Sonoma Mountains. It is miles to those mountains with an unobstructed view. 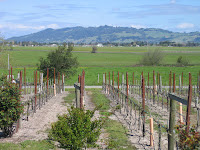 The first order of business is sitting in the warm water of the hot tub. I glance around at the surrounding property and see eucalyptus trees marking the fence line between the adjacent lands and see cows gathered against the fence with faces pointing at us. Are we such a novel sight that the cows have to check us out? They weren’t there when we popped into the Jacuzzi! Who knew cows could be so dang quiet? When did they wander up? Then, just as suddenly, Bessie has a good idea; tells her friends and we see cow butts and tails rapidly twitching, jogging off to some new section of pasture or novelty grass. Wow, they move quickly.

Later in the evening Stewart walks the vineyard with Seth. As Seth passes a vine, he straightens a leader stem and pinches off a succor. He has worked hard to make this dream happen. He crooks his finger towards the four black-speckled eggs on a Killdeer nest. He motions with his head towards the owl boxes placed to encourage nesting and subsequent owl meals of the moles that threaten grape roots. Pointing things out to Stewart fills him with pride.

The boys venture on to the half-mile driveway to partially walk off dinner. The road is lit up by stars and some ancient lighting that vaguely defines the driveway. The California Red-Legged Frogs make their intentions known to any creature who will listen. Stewart asks a question of

Seth and stops walking to listen to the response when . . . “Snort”! Mucus lands on Stewart’s arm as he jumps, turning to see eight pairs of steely eyes, his outline reflected in the black void. “What the hell!?” Bessie and velvet-footed friends strike again.

The next morning, Peyton Ann is scurrying around the kitchen readying Lacey for the drive to school, when Lacey sputters and stops. “Mom, there is a cow in our driveway!”

“What?” Payton Ann cries in response. “I can’t take care of ‘Bessie’ now or you will be late for school--quiet Shadow, quiet Millie!” The cacophony of dog verbalization is near hysteria as PA runs through the entryway, Lacey in tow and dogs safely ensconced behind the home’s front door. Left behind are long clear panes of window glass which afford Mille, the Springer Spaniel and Shadow, the flat-coated Black Lab ample opportunity to decorate the surface with dog level nose-wipes.

Ten minutes later, Payton Ann is back from school drop-off . . . She sees that Bessie, in cow fashion has shared her discovery of formerly forbidden lush grass and tasty shrubbery with twenty of her nearest and dearest friends! How did they get in? PA sees the ground churned up near the fence and sees a break in the barbed wire. How does one get cows back through a broken fence? A nearby broom provides a way for PA to appear larger than her just over five feet reality and she begins to herd Bessie et al toward the tiny opening. It should be noted at this point that cattle follow each other very well in open areas, but when a narrowing of their field of vision happens, they scatter. All that work waving the broom to direct the beasts and they have parted like the Red Sea and are now back in similar formation heading in the opposite direction, down the driveway, towards Petaluma Hill Road; speed limit 55.

911! PA dials. “What is your emergency?” states the nasal voice of the operator.

“I have twenty cows in my back yard!” Peyton Ann says hurriedly. “Can you send someone?”

“I hardly think that is an emergency!” States the elderly woman, making it sound as if she were terribly busy.

“It is when they are heading towards Pet Hill Highway!”

“Are they your cows?”

“If they were, would I be calling you?”

“Have you contacted the owner or Animal Control?”

“Yes, I have left messages, but I need help now!”
“Well, I don’t know what can done to help you, since the animals are on private property.”

“This will become a very public problem when the first cow gets hit by an SUV! Please send a California Highway Patrolman to block off the end of my driveway! “

PA looks around and sees another neighbor, June, running towards her with her own broom.

“They got onto my property yesterday,” June says with disgust. “There are quite a few holes that need to be repaired”.

“I hear the siren, maybe the CHiPs are here?!” Payton Ann says, her voice close to panic.

The officer drives up on his motorcycle. “You have to get your cows back on your property!”

“Well, they can’t come down to Petaluma Hill Road! They have to go back the way they came!”

“I understand, that’s why I called you. Why don’t we all herd them back toward the hole in the fence and I’ll make the hole bigger this time and then we will have a chance to get them through.”

“I’m sorry, Ma’am; you will have to do that on your own, I’m not animal control.”

My tax dollars pay your salary. “Could you block the driveway with your cycle?”

Begrudgingly the officer saunters back down the long drive and posts himself at the entrance to the property.

Meanwhile, June and PA find some heavy gauge wire and rusty wire cutters in the barn. The 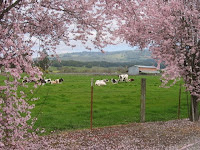 bigger hole in the fence facilitates cow entry back into the boring property from whence they came. Two people herding is much better than one, but three would have been smoother. June and Payton Ann jump and yell; push and prod for another thirty minutes before the last of Bessie’s friends saunter into their own pasture. The damage to the newly laid sod is extreme. Moles could begin tunnels in the leftover hoof prints. Oh well, more food for the owls.