Today, I made Bellyache 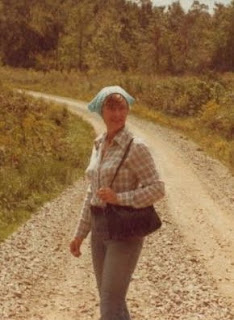 Today, I made Bellyache; a tomato, green pepper and onion concoction that gives you exactly that. I thought I had lost the recipe and cried when I found it carefully tucked into the back of my recipe box with all the rest of her creations; I had forgotten ever putting them there. I was misty as I made it; not because of the fragrant onions but because I could envision my Mother cutting the vegetable medley on camping trips.

Low slung jeans held up by one of Pop’s belts; a Case knife in a sheath on her hip. The blue bandana covered her short cropped hair and the cigarette dangled from her mouth. Perhaps this doesn’t really describe the Mother I knew. To you she probably sounds like a hillbilly or an uneducated woman. No, here was a woman who got into Stanford; could charm heads of state, but who had married a camping country boy with opera aspirations. She chose to be good at camping specifically because it was so against type. It shocked those who knew her. She learned to play the ukulele so she could accompany Pop as he sang around the campfire some really inappropriate songs they both had learned together in college. We girls committed them to memory in one take.

She knew every flower in the forest; every tree that nature dropped in front of her. I saw her once wield a machete to cut down some brush. She could out walk any person. When I was younger I would run to get close, and then have to stop, panting to catch my breath and then off I was again running behind her. She didn’t wait for us.

Skipping gym class because of our menstrual cycles was for wussie girls. Hutchings’ girls didn’t play that card, ever. Once, in the midst of a bout of flu, I even rode a bike in the pouring rain for 65 miles because it never occurred to me to cancel. It was later in life that I learned the wisdom of choosing not to pursue a thing; you just had to hope you made the right decision.

One year ago today, I was six weeks post knee replacement. Up in my ever narrowing recovery room, the phone rang. My sisters and Mother were on the other end of the phone line, singing as only the Hutchings’ can do, a little ditty called, “Happy UN-birthday to you!” to a familiar tune. You see a Christmas Eve birthday affords me some advantages and one of them was an UN-birthday six months from the actual date of birth. As I listen to every word, cracked note and inflection; I am torn between wanting to experience the moment and wishing I had let it go to voicemail. Voicemail would have left me a recording for posterity. This was to be my last conversation with Mom. She passed away two days later with all her children nearby.
Posted by Leslie at 10:50 AM